About the Clutch and Gearbox 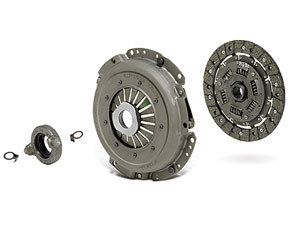 At The Forge Garage we would suggest that if you notice any difficulty selecting gears, especially first gear when trying to pull away then please have a trained clutch specialists make a quick inspection of your clutch and gearbox, as this may be the start of serious and costly problems if ignored. It is much cheaper to replace a worn clutch alone, than it is to replace a clutch, bent flywheel and broken gearbox.

What does a clutch do?

A clutch is a vital part of your cars drive train (Engine - Clutch - Gearbox - Drive shaft - Wheels). Without this vital part the car will no longer be drivable so always get your car checked if you notice and difficulty changing gear or any unusual noises that happen when pressing the clutch pedal down.

Why do we need gears on a vehicle?

All vehicles need a way of transferring the power from the engine to the drive wheels on the road to be able to move. This is done through the gearbox. A gearbox has cogs that mesh together to create different gearing ratios to help the engine perform efficiently at different speeds and in different driving conditions. A car uses multiple gears because the engine has a limited power and speed range.

For example, for pulling away and climbing hills an engine needs to use more power so a lower gear ratio is used letting the engine spin faster compared to the road speed. If a driver was to use a lower gear continuously then the engine would be spinning fast all the time which would cause faster wear, poor fuel economy and ultimately damage the engine.

For general driving such as on flat roads, constant speeds and motorways a higher gear gives better performance, fuel economy, is quieter and more comfortable and also protects the engine from undue stresses caused by over revving.

To help keep your car running at its best we recommend that you always match your speed to the correct gear. There's no hard and fast rule for this as all cars have different engine sizes and gear ratios, however as you drive a vehicle you can very quickly learn what works best.

See Our Reviews On Book My Garage

We are on 1 Link the Fleet Operator Portal
Mini and Mini Cooper Servicing, MOT and ...

We know as fans of the MINI ourselves that the looks and style of this [ ... ]

When you chose to buy a German car no doubt the tradition of build qua [ ... ]

Collection and Delivery Service Available For Service and Repairs

Convenient collection and delivery for service and repairs from your home or work for a small charge based on distance. Larger repairs and very local collections are often FREE. Courtesy Cars also available.